Murder in the Mystery Suite by Ellery Adams 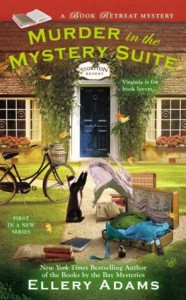 Tucked away in the rolling hills of rural western Virginia is the storybook resort of Storyton Hall, catering to book lovers who want to get away from it all. To increase her number of bookings, resort manager Jane Steward has decided to host a Murder and Mayhem week so that fans of the mystery genre can gather together for some role-playing and fantasy crime solving.
But when the winner of the scavenger hunt, Felix Hampden, is found dead in the Mystery Suite, and the valuable book he won as his prize is missing, Jane realizes one of her guests is an actual murderer. Amid a resort full of fake detectives, Jane is bound and determined to find a real-life killer. There’s no room for error as Jane tries to unlock this mystery before another vacancy opens up…

I have no idea how to review this without spoiling it horribly, because there is a monster twist about a third of the way through that turned it into an entirely different book than I started. But if you like the premise (even if not the execution) of the tv film series "The Librarian" or Warehouse 13, and your favourite character in Batman is Alfred, you'll love this.

Anyway I really liked it, and I think I'll probably keep an eye out for the next in the series. The characters are believable (well, they act in character at least :), the small town feel is beautifully done, and the mystery is nicely twisty and turny. And the setting is fantastic: A resort for book lovers, in a town called Storyton, with books and literary references namedropped at every turn, but always appropriately. As a tentative first foray into the cosy mystery genre, I think I totally picked a winner.