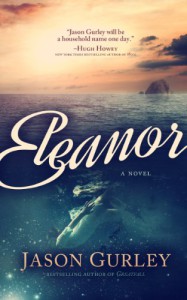 This is one of those books that it's easier to review by writing about what it is not, than what it is.

It's not Neil Gaiman (but it's almost that good), it's not typically YA (despite the teenage protagonists), it's not easily categorised (it's somewhere between metaphysics, magic and uhh, time travel, along with a really vivid depiction of a family failing to deal with grief and completely falling apart).

If I  had access to physical copies of this book, I would probably be that annoying friend going around pressing it into everyone's hands going "you HAVE to read this".

Be warned, for the first four or five chapters, I thought this blurb was for an entirely different book heh. It's not. Bear with it.

1985. The death of Eleanor's twin sister tears her family apart. Her father blames her mother for the accident. When Eleanor's mother looks at her, she sees only the daughter she lost. Their wounded family crumbles under the weight of their shared grief.

1993. Eleanor is fourteen years old when it happens for the first time... when she walks through an ordinary door at school and finds herself in another world. It happens again and again, but it's only a curiosity until that day at the cliffs. The day when Eleanor dives... and something rips her out of time itself.

And on the other side, someone is waiting for her.

It's been heavily compared to Neil Gaiman's "The Ocean at the End of the Lane". It's really not much like that. Oh I can see why people make the comparison, it's got an ocean in it. And it's right out there in the same kind of magical realism hinterland that borders sci-fi, fantasy and literary fiction, like quite a lot of Gaiman's stuff (among others. Isabel Allende would love this book, for instance). And it's got a lyrical but eminently readable style, as does Gaiman, albeit the writing styles are very different. So no, it's not really that much like Ocean, but it's almost as good - and that, from me, is extremely high praise, because not only have I been a Gaiman fan since the Sandman days, but Ocean was one of my favourite books of last year.

And yes, for you YA haters out there (of which I am very often one) the protagonist and her male friend are teenagers, but they are vividly drawn, wonderfully written teenagers, who are friends, and have more than enough on their plates without worrying how their hair looks. I wish a few actual YA writers would read this and see how it's done. Also unlike the average YA novel, the adults are not caricatures or throwaway characters, they are actual people, with their own motivations and voices.

Oh yes, there's some magic stuff too. And dreams walking and time travel and dinosaurs and love and loss and grief and pain and redemption, all wrapped up in one hell of a read.

Recommended for: Everyone! You have to read this book! If you grab one indie published book this entire year, let it be this one! Go read the sample! right now! yes you!11eleventyone!!11!

Not recommended for: Well ok, if you really are anti-fantasy/fantastical/magical anything, you might not like this, and we shall not speak of it, lest we can no longer be friends.