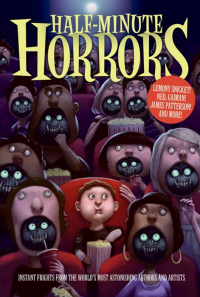 This is a collection of short (very short) horror stories, and the occasional comic, illustration and even illustrated poem. The authors range from the usual suspects (Neil Gaiman, Lemony Snicket) to some rather unexpected (James Patterson, Margaret Atwood) and few of the stories run more than a page and a half, most coming in well under that.

Given my lack of spare time (or rather, that it's patchy and I don't know how much time I'll have to settle into a book) this should have been a win for me.  On the other hand, drabbles in general don't really float my boat.

A few of them are genuinely creepy, and a few are smirkaliciously funny, but it's very hit and miss, and a lot of the stories are quite similar. There's only so  many ways you can twist the monster under the bed in a half page, after all (and yet, there's more than you'd think.) I found many of the illustrated stories more successful than the prose.

Probably the kind of thing you want to have sitting around to pick up and dip into a random page, particularly when you realise that the story and it's author are a rather unexpected combo.