The Mamluks by Edward Lake 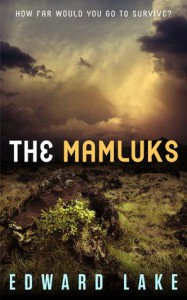 Kindle Freebie, which I grabbed because it didn't have many reviews, but did have pretty high ones, so I thought worth a shot.

Horrible book, didn't finish, gave up around 30%. By which time the earth has been invaded by random aliens, who have levelled LA (and probably elsewhere), put the surviving humans to work randomly digging things for unexplained reasons, then taken all the women to their spaceship of luuuurve. The story follows a young LA couple who are separated early on in the story, switching POV between them at each chapter. The hero, Andrew, escapes his digging duties and meets up with a quite literally underground group, while his erstwhile girlfriend Emily, now on an alien spaceship, is apparently so glad to have hot baths and cute shoes, she doesn't mind opening her legs to the "champion" of the invaders.

The poor writing struck me from the first chapter. The first three pages seem to involve the young couple watching a movie, with the vitally important detail it's being watched on a Playstation 3 mentioned three times over.

"You're such a brat. but I still love you. I opened the case and put the movie in my PlayStation 3, then went to the sofa and cuddled with Emily. She grabbed the bowl of popcorn off the coffee table and tucked it between us. I picked up the PlayStation 3 controller and pressed play."

The dialogue is full of horrible stiff exposition. Nobody actually says "I desperately dropped down and hid behind a wrecked car. I stayed there and watched for a while. And moments later, a fighter jet flew in." And odd word choices: "So far, the only things the Mamluks put in the holes were giant trees and huge plants that had strange leaves--indubitably ones from their planet." Which wouldn't stand out so badly, but for the simple plain language of the rest of the story. Also the POV switching is disorienting. The first person POV switches at every chapter but there's no chapter headings or other indication. Each time it takes a few lines before I realised. And finally, a typical beginner author fascination with fashion. Because it truly matters that the alien invader champion is wearing a beige shirt on his first appearance. And everyone's eye colour is integral to the plot.

Mostly though, the story is just silly, and the characters are flat. Emily starts out the unlikeable when she's all about running away and not helping anyone, and rapidly becomes unfathomable, when she puts up no resistance whatsoever to becoming alien brood mare. I mean literally, her only problem with opening her legs is that "I want to talk first", and when the alien soldier laughs at her human silliness, she just lies down and lets him get on with it. Andrew meanwhile is just dull, he has practically no personality.

I think this is a really good example of a debut book that would have been a thousand times better if it had been through the hands of a really good editor.