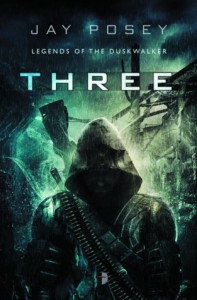 A post-apocalyptic bounty hunter "Three" picks up some waifs in trouble, a dying mother and a child of unknown but possibly worldchanging potential and despite his best attempts not to gets pulled into their desperate attempt to flee from an enemy that will not ever stop hunting them. And to get away they need to cross a bleak wilderness inhabited by deadly creatures that make the night a place of pure terror.

Although this is a far future apocalyptic setting complete with everyone jacked into the net, digital upload of the soul on death, and even electrified zombies of a sort, it's very much a western in form and structure [1]. Think Shane, or Yojimbo (I mean, A Fistful of Dollars). We have the man with no past, quite literally a man with no name, who finds himself fighting for good, an enemy that revels in being bad, and the innocents caught in the crossfire.

The writing is awfully good. As usual for me that means more show, less tell. I don't care if things aren't explained, because in reality, who can explain the entire world? Some things just are. For instance the Weir, the deadly electric zombies that seem to still be jacked into the network, but only come out at night, and like most zombies, are mindless killers. For Cass, Wren and Three, they are simply a fact of their existence to be dealt with, avoided, or killed - they don't know what makes them tick, apparently nobody does, but it doesn't make any difference to the fact that if they catch you, they'll kill you.

Similarly the descriptions of the world are fabulous. Check these out:

"It was as if some great ocean of destruction had rolled its unyielding tide through the city and then, upon its terrible recession, left behind only a shoreline of concrete sand and crushed humanity.”

Golden beams of sunlight spilled through the skeletal high rises, and through the concrete and steel network of interlaced highways, bypasses, and rails that once flowed with harried humanity, now devoid of all but the meanest signs of life. Overpasses stacked ten high lay inert, arteries of a city embalmed.

If the Strand were the unbroken sand after a recent surge, these were the remnant sandcastles along the fringe, rounded and bowed by the tide, but not completely destroyed. [...] But by and large, taking it all in at once left one with more or less the same impression. Urban. Decayed. The corpse of a once-unbroken cityscape.

Can't you just see it? And honestly, there's very little description in the book, but when it's this crystal clear it's all I need.

Storywise, the characters are strong but uneven.  But the plot, to me, is such a classic "fleeing across the wilderness towards the merest hope of a safe place" that it's difficult to get wrong and this book certainly got it right. But I think this author could pretty much write a telephone book and I'd enjoy it, and considering this is a debut (albeit, he's been writing for games for years and years) I am so far beyond impressed.

Recommended for: Western fans (as long as you're willing to stretch it a bit). People who like show more than tell. Cyberpunks.

Not recommended for: Romantics, people who need a HEA. Anyone who is frustrated by fleeting mentions of things that are not further explained (they're often hinted at, and with a little thought, you can figure many of them out, but you don't get direct explanations.)

The only reason this doesn't get past 4 star, is the epilogue. For me, dark as it would have been, I would have stopped before the epilogue. Although it's clear to me what is going on there (see spoiler), it just wasn't as strong as the rest of the story, being a two page wrap-up. And yet, if it had been stretched out to a proper chapter or so, it would have weakened the impact of that preceding chapter even further, the bittersweet reunion and ShaneThree's departure. There's a reason the original Shane didn't have five minutes of "and the farmers were happy and went back to farming" after all.

Some reviewers find it bizarre that a child is able to take control, but Wren can really control the Weir, among his many other talents, unlike his father the pretender, and although he's a small child that is world changing power, given the state of fear the soft city dwellers are in after the attack and the coup, I can see them setting the golden child on the throne - especially with his mother there not only as adviser but a very real artifact of his power. Even more importantly, since he can awaken the human they once were, restoring them - but now in undead, undecaying, "perfected" as Asher put it, form. He might just be the father of the future of the world, or at least the architect of a new peace.

[1] If you're interested in that kind of thing, and I guess you can tell I am, there's some really great stuff by sociologist Will Wright about the 16 plot points that make up a western, and the difference between a classic, vengeance, transitional and a professional western. And I love me some good old fashioned western. Try "Six Guns and Society: A structural study of the Western". This fits the "Classic" setting: The hero outside society, and his progressive integration into society - The epitome of the classic genre is, as I mentioned already, Shane, and I can totally see this as a post-apocalyptic retelling of that same basic story, with Cass and Wren standing in for the farmers.