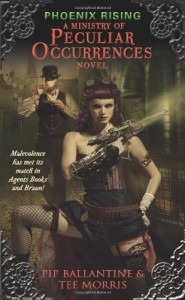 I really wanted to love this book, I'm a kiwi girl, the heroine is a kiwi girl. With explosives. How could I not love that? But it's really just ok. (ETA, it failed to push my buttons so hard I actually forgot the title of it and had to come back and fix this post. Heh.)

Some of the high spots are brilliant: The weaving in of real world places like Bedlam (which really did have the figures of melancholy and raving madness on the gate, as so beautifully described here) and late Victorian Whitechapel are quite evocative. The placing in it's setting is astonishingly good, it's almost worth the read for that alone.

The characters are quite likeable, once you get past the idiotic names, which is a pet peeve of mine. Books internal conversations with his idea of what his father would say to him, turn him into a character with unexpected depth towards the end of the story. The awkwardness of their relationship, and their growing trust in one another is quite deftly done too.

The steampunk setting infuses the entire story, and indeed the plot, it's not just a token place setting, with a few airships over an otherwise unchanged world. We have mechanised prosthetic limbs, the obligatory airships, advanced ordinance, and even a mechanical bartender.

But the plot itself meanders, particularly the second act. Actually to be honest, most of the first act too. And it's quite silly, even for a steampunk story. Some of the fight scenes are rather ridiculous, the villain is a caricature who would not be out of place in a Bond movie, and for "secret" government operatives, how all of London (including everyone at the mansion later) doesn't recognise Eliza after the opera, I have no idea. The whole mansion thing is just... weird.

There's also a very obvious set up for a future book or two: Dr Sound seems to be making cameos from his own book into this one, randomly appearing and being mysterious for no reason whatsoever, and there's another entire plot going on with the other agent being set up to spy for an anti-ministry faction, with not enough info given there to make it compelling or a threat, and too much to be simply a part of the world building. It makes me suspect this and book 2 were originally one story, were split, and fragments remained in this one to set up the second. Clumsily.

Anyway, I'll probably read the second one, but mostly for the setting and the asides, certainly not with great expectations of the plotting or the pacing.