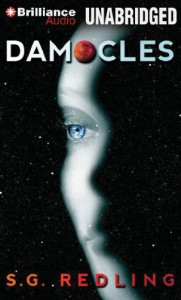 First Contact where we, humanity, are the potentially hostile, terrifyingly alien aliens, with a tiny explorer ship making an unplanned landing on a technologically (and militarily) advanced planet. One that hasn't even thought of looking to the stars yet. You bet they will now though.

I did enjoy this, particularly the try at writing an alien race in a way that isn't just humans in a rubber suit, how a different physiology etc. might affect psychology and culture. In this respect it does very well, certainly better than many other such attempts I've read. A lot of the conflict is about trying to build a necessary trust with something you cannot even begin to understand. Redling manages to do it without falling too often into infodump land, but rather letting the differences in thinking and viewpoint tell a lot of the story.

I read this way back in March, and it's stuck with me, suggesting it might deserve a higher rating, and yet...

There's something just a little too glib about it. It's not that the heroine is a bit too Mary Sue for me, it's that everyone is just a little too... whatever they are. There's not an average person to be found in the entire book. Now that might well be because all the characters belong to the space administration of their respective planets, but still. It's kind of like trying to watch TV with the saturation turned up too high, and I longed for it all to be toned down just a little bit.

Still, this is definitely worth a shot if you liked say, Contact, or Arrival (or the Ted Chiang short that was based on - which I for one liked a lot better.) In fact, definitely if you liked Arrival, it clearly shares a lot of DNA.

So, as to the rating, it's probably me, book, not you.