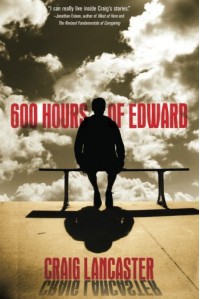 This could have been a very difficult book to read. It's written first person, with a protagonist with Asperger's, OCD - high functioning but with some fairly severe social issues. His wealthy politician father has bought him a house to live in, and for the past 8 years that's what he's done, lived alone, and fairly happily, going to therapy, keeping to his routines. His father communicates with him primarily through threatening letters from his lawyer, although once a month he goes to dinner with his mother and father, an uncomfortable experience for all.

Edward has a fixation on Dragnet (he watches exactly one episode, every night, at exactly 10 p.m., but only the colour episodes, and strictly in order.) He has another fixation on the weather - he's been recording the daily highs and lows for ten years in a notebook, and although he checks the forecast every day, he doesn't really believe them. Edward prefers facts.

Edward goes to therapy, and writes letters of complaint - one every day. He doesn't send them anymore though, since the "Garth Brooks incident" which resulted in a restraining order. The not sending them is on the advice of his therapist, who he considers a very wise and logical woman.

And into this quietly ordered life, a new neighbour arrives and suddenly Edward's world is tipped upside down. The neighbour's 9 year old son inserts himself into Edward's life and suddenly he has friends - the boy and after a while, his mother. And from there, he begins to reevaluate all his choices, how important to him his routines and orderliness really are, and things begin to change.

This could so easily have been handled very wrongly, and to be honest, even by the end of it, I had a niggling worry that it was... inaccurate, at least, although I found Edward charming and somehow relateable and his issues handled sensitively and with compassion, but not covered up. I don't know anyone with Aspergers and/or this degree of social anxiety well enough to really judge for sure. That said, I took a troll around the internet looking for SJW posts of outrage about how awful it was, and found actually the exact opposite - several online reviews and blog posts praising it. So there you go.

The writing is rather charming and I think deceptively clever. The initial chapters are, like Edward, very repetitive and orderly. Edward wakes up (and we get a little dissertation on the time, etc), goes about his day, watches his dragnet, writes his letter of complaint about something that happened during the day and goes to bed. Over a few days, the repetitive rythym and routine of Edward's life settles in, and then as Edward's order begins to be upset, so does the rythym of the chapters.

It's very funny. Edward's obliviousness about other people's priorities and social niceties obviously sets up some quite hilarious situations, but since they are always told from Edward's point of view and he simply doesn't care who he upsets or what anyone else thinks about him for the most part, there is never a sense he is the butt of the joke.  Edward himself, I found utterly endearing.

If you like books that are heavy on plot and action, this one probably isn't for you. It's rather literary in that sense, but it's a fast and easy read - once I settled down to actually start it, I read it more or less in a day.

Really the only thing that wasn't a total winner for me was there's possibly a little too much about the Dallas Cowboys (I used to live in Texas. I once got politely asked to leave the Dallas Cowboys merchandise store in Dallas because I asked "Who is this Troy Aiken dude" and the staff were worried a fight might break out :) but it's actually plot relevant, and I dealt with it.

Every month my phone gives me a free kindle book, but I only get to pick from a selection of four, and I rarely remember to even go get one, or read it. I should read them more though, because most of the ones I have read, have been gems. This was no exception, it's probably the best book I've read in months.

A review from someone who actually does have Asperger's, that I found interesting: